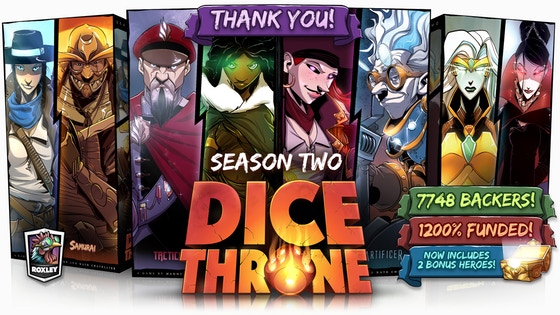 A heart-pumping, fast-playing game of skilled card play & dice manipulation that will have your game nights cheering!

Latest Updates from Our Project:

TL;DR: What are you reading this update for? Check out the campaign page and ALL of the awesome news and big reveals, HERE!

(Okay, we included some cool pictures here. But most of the good stuff's over there, we promise!)

Exploration, gold, treasure, upgrades, minions, boss battles, and even a shopkeeper named Rosella? Welcome to the latest addition to the Dice Throne universe!

The fully cooperative expansion to Dice Throne is finally here, in all its glory! Now you, your friends and your family can take your favorite heroes together through a land of randomly generated worlds, beautiful environments, intense boss battles, innovative Diablo-style looting, and non-destructive legacy elements. Full details are on the campaign page, but here's some teasers for you now:

Dice Throne Adventures is 100% compatible with your existing heroes, all future ones, and Season One: Rerolled. Which brings us to....

The community has been asking for a remastered Season One for months. We weren't planning to do this until next year... but the reprint of Season One that was projected to keep stores in stock until the end of 2019 is already sold out! Season One: Rerolled will arrive in 2020, and will feature the Original Six heroes you know and love, reformatted into the Season Two standard for player boards, cards, dice, and streamlined rules. (Very few changes have been made, for clarity and player experience; if you have Season One already, we want to stress that this is an entirely optional purchase).

Season One: Rerolled will also include two new Lost Heroes of Season One, the long-awaited Treant and the brand new Ninja, to fill out the Original Six in a Season Two style Battle Chest! (Both will have their own 1v1 Battle Box, for those who already have Season One.)

Again, for full details, head on over to the campaign page.

Join us at 6 PM PST For A Live Stream with Nate & Manny!

At 6 PM PST (9 PM EST, 4 AM GMT) Nate & Manny will be playing through the demo scenario of Dice Throne Adventures live on Facebook, and we'd love to have you join us for a better look at the game. Click here to join the Facebook event!

See you in the Kickstarter comments!

Albino Dragon is a company that licenses popular brands to create high quality official Bicycle decks of playing cards. They have just launched a new campaign for a Dice Throne deck of cards! Now, before some of you panic, let me clarify one thing: this is not our Kickstarter and will not affect the schedule of Season Three in any way since we are not personally involved. I also understand a cool unique deck of cards is awesome for some and meaningless to others. As for me, I am excited to pull this out for my next poker night. Either way, it feels surreal to me that our little game has garnered enough attention that someone would want to license the brand to create a deck of playing cards. This is a testament to your awesomeness within this community. Thank you for helping the world to know about Dice Throne! 😄

What other product would you like to see a Dice Throne branded version of?

If you missed the show, you can catch the live streams on our Dice Throne FB page thanks to the amazing Drake and Julia Finney! But we'll give you some of the highlights here:

Aaron Hine ran a 64-person tournament. Thank you to Aaron and everyone who competed. Congrats to our top 4 tournament champions!

As you may have noticed, we are no longer doing bi-weekly updates regularly.   This is because the project is now drawing to a conclusion.  We will be sending updates in the future, but they will not be with any sort of regularity.

Play games, compete in the DT World Championship, be the first people to play Season 3 prototypes, and challenge Nate, Manny, and Gavan to 1v1 duels! We also have a sweet swag bag with fun stuff as well.

We hope to see you there, but if you can't attend, please ensure you are on our Facebook group to see live reveals of Season Three this weekend!

Millennium Blades is a board game about a group of friends who play a collectible trading card game also called Millennium Blades. Buy boosters, sell singles on the after-market, trade cards with your friends, build up your deck, and discover game-breaking strategies. All in one box, all in 2-3 hours.

Millennium Blades was originally released in 2016, and has had an amazing reception on Boardgamegeek!  Our friends at Level 99 games are now running a Kickstarter for what will be the final expansion for Millennium Blades, Crossover Collusion.   As huge fans of Dice Throne, Level 99 has teamed up with our team to put several of the Dice Throne characters into Crossover Collusion!  Their campaign currently rocking Kickstarter, with over $400,000 so far.

Check out their Kickstarter now!

Recently Becca Scott did a How to Play video that was flavorful and informative!

And then they did a Game the Game sequence and Nate had the privileged of joining them on set.

Your games should be arriving at Conclave's warehouse from where they will be shipped out to you soon.  You will receive an email with instructions on how to pay import fees when before your game is ready to be shipped out.  We have found this solution to greatly reduce import costs to you, and we are thankful for the partnership we have with Conclave!

Long time, no talk! We are so happy to continue to see all the photos and reviews of Dice Throne: Season Two on social media. Thank you to everyone who has helped spread the word of Dice Throne and to those who have given us a rating on BGG! :)

We're excited to say that all product has shipped (*Brazilians, please see the note below)! It's been a fun journey. At this time, if you have not received your game please contact ks@roxley.com and we can help figure out what happened.

South America/Brazil prove to be a challenge for most game publishers, but we believe we have a system in place to make it less of an issue. We are working with a publisher in Brazil called Conclave. The games are at the port waiting to be delivered to Conclave and they will work to deliver your games as quickly as possible. You will get your games. Thanks for continuing to be patient. Again, if you have any specific questions, please contact us at ks@roxley.com.

Pax South year three has come and gone. It was even more epic than last year (which was pretty epic). San Antonio has become a second home for DT. It's where it all began at the Indie Showcase. We got to see many old friends who we only see at PAX South and it was bittersweet to leave. We've built a great foundation at PAX South and our volunteers are key to helping us, so we wanted to give a HUGE shoutout to our amazing volunteers:

You guys rock, thank you!

Thank you to the 32 players that competed in our official PAX South tournament! And thank you to Aaron Hine for organizing it!

Nate and Gavan threw down, on a mat! Gavan was a boss all weekend, schooling people at POG Throne. But would his streak remain when he battled Nate? Watch and see!

It's coming. We don't a have a date set yet for this campaign yet, but more info will be revealed over the next couple of months.

Season Three was also selected as one of the most anticipated games of 2019 at Man vs. Meeple! Thank you Kira!

Speaking of Season Three, want to be among the first to try out this new campaign game mode and some new heroes? We're less than a month away from the second annual(?) Dice throne convention set in Spokane, Washington (DT headquarters!):

We look forward to hanging out with you Feb. 23rd!

Want to try out Dice Throne digitally? We have done a ton of updates to our official FREE tabletop simulator mod (including character select, dials, and more). Check it out! Thanks to Ken Cunningham for all of the help taking this to the next level!